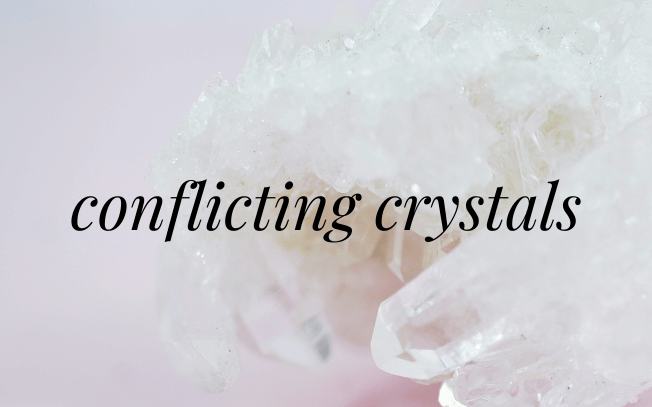 Crystals are a powerful way to tap into your spirituality, connect with the Universe, and manifest your desires. Like using crystals to attract more friends, or attracting wealth from crystals.

And while there are many powerful gemstone combinations, there are also plenty of conflicting crystals.

When most people first hear about conflicting crystals, they imagine crystal pairings that attract negative energy and chaos into their life. Luckily, this isn’t the case.

While conflicting crystals won’t bring you bad vibes, they also won’t work to their full potential when paired together. Keep reading to learn common conflicting combinations.

It’s incredibly common for people to wear multiple crystals at a time, or decorate their homes with many different gemstones.

Today, we’re going to list some common conflicting crystals, but there’s something you need to keep in mind.

There is no definitive list of conflicting crystals. That’s because there are endless combinations of crystals that don’t pair nicely together and on top of that, it depends on why you’re using the crystals. In the below examples, we’re going to give some very common situations we come across and why the crystal combinations are less than ideal.

And then later on, we’re going to teach you how to identify which crystals should not be kept together or used together based upon your intentions!

But first, let’s talk about some common conflicting crystals that we see people use often.

Clear Quartz and The Wrong Crystal

Clear Quartz is an amplifier. This means whenever you pair Clear Quartz with another crystal it will amplify its vibrations and powers.

That can usually be a good thing, but you want to be careful and make sure the gemstones you are using are the correct ones.

For example, let’s say you are anxious and accidentally reach for your Citrine. Citrine is a great crystal for things like motivation and energy, but when you’re nervous system is firing at 100 miles per hour, you probably don’t want a shot of energy. Pairing Clear Quartz with the wrong crystal in this instance can amplify the wrong feelings.

When you pair Clear Quartz with other crystals, make sure you have a strong understanding of what those crystals are used for so you don’t accidentally amplify the wrong energy.

Tiger’s Eye is one of our favorite gemstones for confidence. It gives you revitalizing energy and allows you to live boldly and freely—just like the tiger.

Smoky Quartz, on the other hand, is a wonderful crystal for empaths as it grounds you and shields you from energy.

It makes sense then that these two conflicting crystals don’t work well together if you’re using Tiger’s Eye for confidence and Smoky Quartz for empath protection. One tries to harness the energy around you to turn it into something you can use, while the other tries to block that same energy!

Pairing these two crystals together won’t do any harm, but you also won’t feel any major benefits.

While we’re talking about Tiger’s Eye, it’s worth mentioning that Tiger’s Eye and Amazonite also don’t make the best crystal combination. Since many people use Amazonite to sleep, pairing it with Tiger’s Eye will cancel out the relaxing benefits and keep you wide awake, all night long.

We love both Orange Calcite and Blue Lace Agate, but generally not together.

Orange Calcite will kickstart your creativity and imagination, letting ideas flow freely to you! It’s the perfect gemstone to sharpen your mind and give you the energy you need to follow through with projects.

And Blue Lace Agate is a good crystal for stress and anxiety as it calms your mind and washes you with peace.

These two crystals are trying to achieve two very different outcomes: one wants to rev up your mind’s engine while the other wants to park the car in the garage and let you rest.

You can see how these two crystal combinations aren’t going to be too powerful together. These are best used apart in most cases (again, depending on your intentions).

Like I’ve mentioned a couple of times, it all depends on what you want to use your crystals for. If you came here to find a list of conflicting crystals, you won’t find it. That’s because it’s impossible to list all of the potentially conflicting crystal combinations since it entirely depends on your intentions.

That’s why setting your intentions when you use your crystals is so important. This way, the Universe knows exactly why you want to use each crystal and there won’t be any funky energy going on.

By this point, you’re probably confused. I’ve pretty much told you that some crystals don’t work well together but now I’m telling you that they might actually be ok if you set your intentions. What the heck!

Above, we mentioned that Tiger’s Eye and Smoky Quartz might not play nicely together.

And this is a big one…depending on your intentions, they might actually work very well together.

In the above example, we explained that if you’re an empath using Tiger’s Eye for confidence, pairing it with Smoky Quartz might not work.

But let’s say you want to use Tiger’s Eye as a crystal to help you focus and Smoky Quartz to protect you from the energy surrounding you.

Now you have a winning combination!

When you want focus, it makes sense you also want to block out any unwanted energy. In this case, being clear about why you want to use each crystal and what you want from it (setting your intention) makes a huge difference.

We also recommend getting a Selenite slab to cleanse your crystals.

As I’ve mentioned, you need to set your intentions with your crystals. But if you forget to cleanse your crystals and begin to use them for another purpose, they might hold unwanted energy from your past intentions. The easiest way to cleanse them is by placing them on a Selenite slab. We like to let our crystals rest on Selenite when we’re not using them, because Selenite also acts as a charging device and lightly charges our crystals.

We love this shop on Etsy; they have beautiful Selenite slabs, wands, and bowls at great prices.

Here are three questions you can ask yourself when pairing crystals together:

What happens if you wear too many crystals at once?

Nothing bad will happen if you wear to many crystals at once. It can be tedious at first to figure out what crystals work well together along with your goals, but once you’ve figured that out, you can wear as many crystals as you’d like!

Using conflicting crystals won’t be any negative or disorderly energy in your life. You may notice your crystals aren’t working, in which case, it’s likely that they aren’t the right crystals to use together.

If you switch out your crystals and make it clear to the Universe what you want (either by thinking it in your head or asking it out loud) you can avoid using crystals that conflict with each other.

Nothing we provide for you here is intended to replace any form of competent professional advice in any form. Please read our Terms & Condition for more information.

23 thoughts on “Conflicting Crystals: Which Crystals to Avoid Using Together”

Welcome to our cozy corner on the internet. Divine Twist is here to help you learn how to use crystals and healing stones to uplift your energy and transform your life. We are happy you are here.
Learn more about us here.

Find What You Need:

The articles on this blog may include affiliate links. www.divinetwist.com is a participant of Amazon.com Services LLC Associates Program. As an Amazon Associate, I earn a commission from qualifying purchase. www.divinetwist.com participates in other affiliate programs, and receives commissions when purchases are made through the links. This is at no extra cost to you.
Facebook | YouTube | Twitter | Pinterest
Privacy Policy | Terms & Conditions | Member Agreement